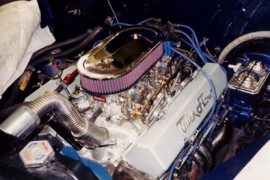 Jeremy’s love for cars started like most guys. His Dad was a body man who used to work on cars at the house in his spare time. Jeremy got to spend extra time with him when he helped in the garage.  Like most kids, you can never have enough time with your dad. One day his dad brought home a wrecked 46 Ford coupe. The car looked so bad, Jeremy’s sister asked her mom “has dad lost his mind?” It took Jeremy and his dad three years to finish the car.

His dad still enjoys driving it, and Jeremy still enjoys the skills and memories that came from that project.

After High school, he thought he’d become a mechanic. Jeremy had the skills to do the job, but didn’t like working on the rusty junk they always gave him. He went back to to his school to seek advice from his auto shop teacher. Jeremy’s shop teacher had a friend at Sterling Performance looking for a good apprentice. Jeremy got the job and started there in the parts cleaning area. During the next three years he worked his way up to engine builder. Jeremy loved building offshore racing engines. The job was interesting and he thought of it as a paid education. Finding out what it takes to make an race engine survive 7500 rpm for 2 hours became his obsession. After five years of building marine race engines, some of Jeremy’s friends told him that Chris Holbrook was looking for someone to join his operation. Jeremy’s endurance race engine knowledge base and the fact that Chris was looking for an engine builder that didn’t drag race, made Jeremy the perfect solution. He’s been working at Holbrook Racing Engines since 2004. Jeremy’s offshore marine background has increased the mechanical diversity of Chris’s shop. Jeremy’s engine building and machining talent is just one more reason to bring your engine to Holbrook Racing Engines.